The unique concept of Varos Village Hotel & Residences gives you a chance of an unprecedented holiday on Lemnos island. With authenticity, Luxury and Tradition being our core values.

The island of Lemnos (Limnos) has a history that counts over seven thousand years. It is this historical past combined with the vast and unexplored beauty of the island that inspired us to create the village hotel you visit, reviving the old mansions with great love and care.

The Varos Residences of Varos Village Hotel & Residences have been lovingly restored with respect and dedication to the culture and tradition of Lemnos, paying homage to the people who once worked on the land and had their livelihoods in these buildings.

Delve into the history of our Residences, and discover the uniqueness of each by unraveling their story.

ARCHONTIKO (… former mansion Pavlidis)
This is a ‘Noble house’ and one of the most beautiful in the whole village, once belonging to the village doctor, Ioannis Pavlidis. He was famed throughout the island, and built his house opposite the town’s medical clinic. The house has now been fully restored to its original form. It features paved walkways, lanterns, handcrafted ironwork, flowery patterns, and a covered well. These lovingly restored touches send a message of hope that the house’s former beauty is not lost.

PETRINO (… formerly Clinical Pavlidis)
The old village clinic was run by Dr Pavlidis, and was primarily used as a maternity hospital. During the German occupation of Lemnos, the building was converted into the German clinic’s headquarters. Today, the clinic has been brought back to life with care, through the extensive use of wood, stone and tile. The complex has been named Petrino (which means stone) as a homage to the fact that it has been restored using original and local hewn stone from volcanic rocks. 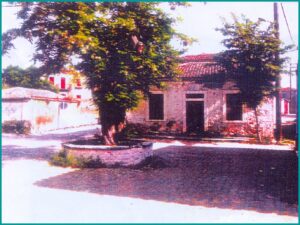 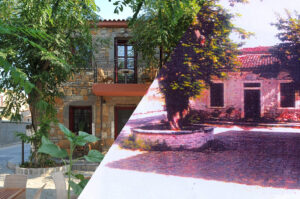 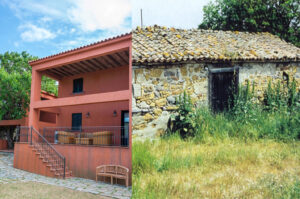 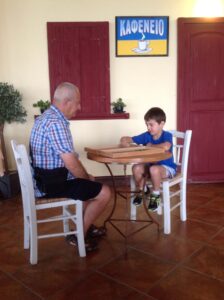 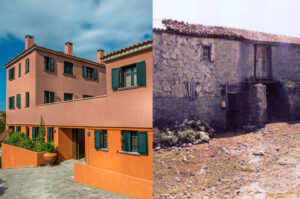 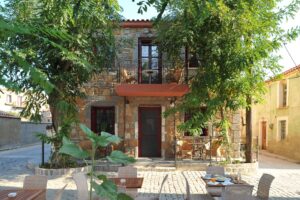 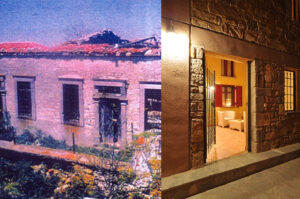 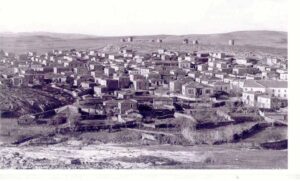 TRADITIONAL KAFENEIO (… former Skarpeti Traditional Cafe in the village square)
The old kafeneio (coffee shop) was the largest of the four coffee shops in the village square. At the rear of the kafeneio there used to be a grocery shop, while the upper floor was used as a family residence.
During the German occupation, officers of the German army lived here. Later, in the 1950’s after the owners had abandoned the kafeneio, it was used by the Greek army as a grain warehouse. The building has now been named the Traditional Kafeneion to commemorate its history. In this fully restored building, you can enjoy a freshly brewed Greek coffee and a game of backgammon, just as the local villagers did almost 200 years ago!

The reception area for the Varos Residences is also located in the Traditional Kafeneio.

MOURIES (… former Dimitreli’s warehouse)
This former cotton-warehouse belonged to an M. Dimitrelis. Up until 1950, Lemnos was famous for the cultivation and production of cotton, which was exported far and wide across Greece, as well as being particularly popular in Egypt. Lemnian cotton enjoyed a worldwide reputation for its excellent quality, and was characterised by its bright white colour.

During the renovation of the warehouse, we preserved an old mulberry tree, which rises through the terrace of one of the apartments. In honour of this beautiful tree, the complex was named Mouries, which means berries.

MONASTERY (… former mansion Raftopoulos)
This noble house was built around 1850; it is the largest in the village and was owned by Haralambos Raftopoulos, the island’s pharmacist. Haralambos Raftopoulos traded to Odessa, where the Greek communities thrived. His surname reveals a connection with Venetian ancestry, through the origin of the name’s prefix: ‘Rauto’. The Venetians ruled the Aegean and Lemnos until 1479, when under the weight of Turkish rule, they were forced to cede the island to the Turks. The Raftopoulos mansion was renamed the Monastery, because of its monastic shape and its courtyard. To this day, Raftopoulos’ grandson continues his grandfather’s pharmacy business in Athens, at the end of Ambelokipi area.

LEMNIAN GAEA
This complex extends to the entrance of the village, on the hill where in ancient times mud was extracted. Lemnian Terra mud was famous for its therapeutic propertie, and was described as ‘miraculou’ by the ancient Greek philosopher-physician Hippocrates in his writings. It was well known throughout the world, and used either as a pill, to treat stomach pains, or as an ointment for wounds and burns.
From the residence’s veranda smothered in flowers of Lemnian Gaea, you can be enchanted by the beautiful view to the prehistoric, volcanic crater Mosychlos. Observe the entire village and identify the hotel’s buildings – or as we would call them: the village jewellery! Let your eyes roam to infinity over the Moudros Bay. Lemnian Gaea is home to the Hotel’s Pool & Suites, as well as the pool bar restaurant “Elia”, the awarded, Greek restaurant “Veranda” with local recipes, the hotel’s organic garden, the traditional corner, and the ceramic store with ceramic souvenirs of Terra Lemnian. Here you will also find the “Lithos” private lounge, the “Politia” conference hall, the “Armonia” event hall, as well as the gym, the massage room, the swimming pool for children and of course the hotel’s Reception and parking area. It is home to all the authentic landmarks of the area. The original stone flour mills and the cereal and grains storage warehouse, have been restored and turned into Sea View Suites, offering special accommodation to those who choose to stay in pool area.

We wish you a pleasant stay and a wonderful journey through time!